Here’s the bottom line up front: what are you planning on doing? A so-called home defense weapon is worlds apart from what I’m discussing here. ‘Home defense’ implies that I’m back on my heels, in my so-called retreat, just trying to live my life until ‘they’ leave me alone. Well, they’re not going to leave you alone. You need to wake up to the reality that there’s no magical retreat to skip off to where you’re out of the reach of someone who wants you gone. You’re no longer living in a civil society and the fantasy of the so-called rule of law is null in void. Do you understand that?

So with that disclaimer out of the way, let’s go over my go-to weapon setup. This is a general purpose carbine; a jack of all trades that can perform a wide variety of tasks in my environment based on my combat experience.It is an offensive weapon, capable of killing from zero to six hundred meters. 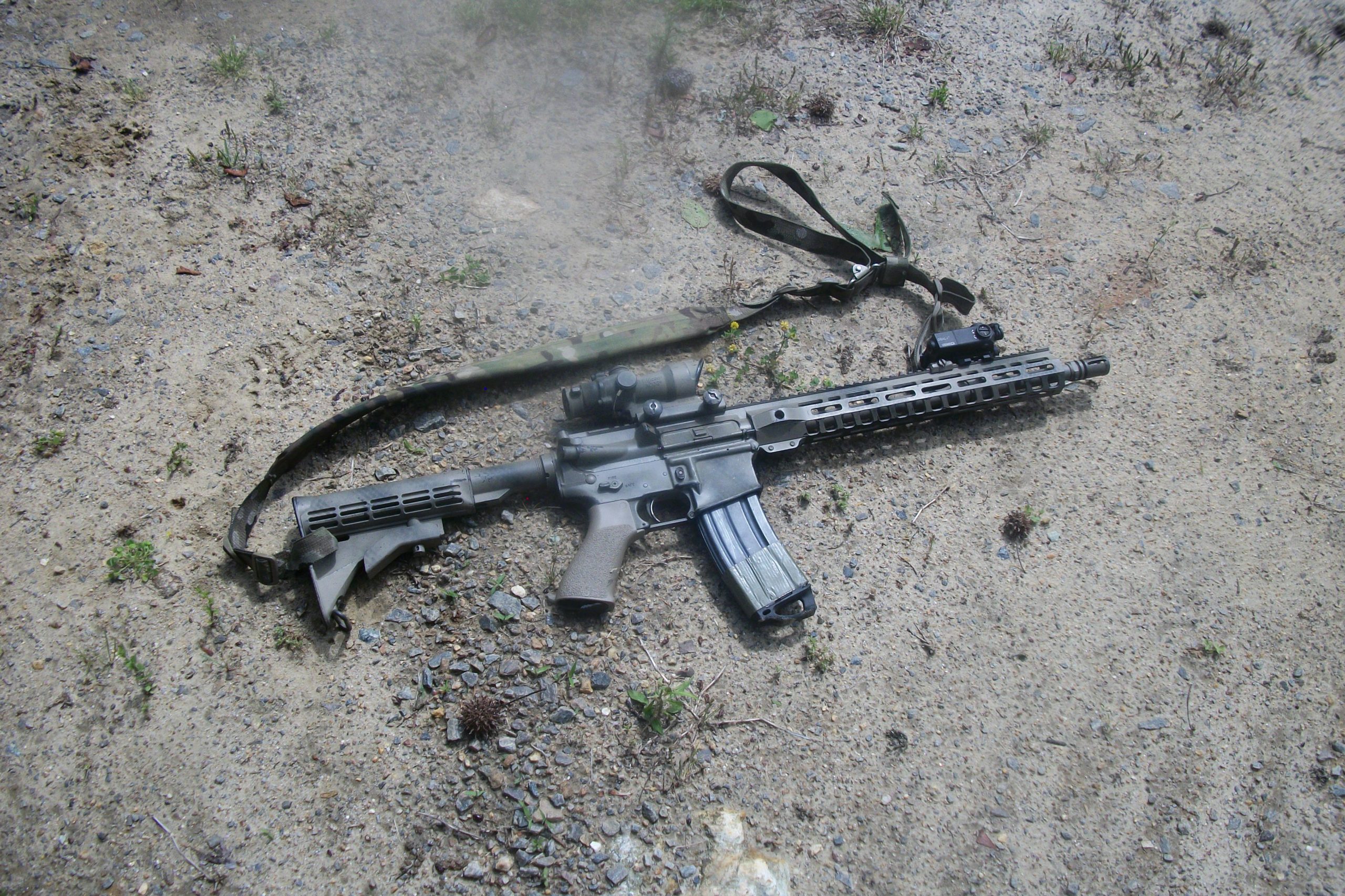 The barrel is a 1/7 twist FN M4 barrel with a mid-length gas system and a standard A2 birdcage. I run a 1/7 because 77gr OTM does its job. The A2 birdcage works well enough at mitigating muzzle flash at night, which is a major consideration for a patrolling weapon. On night raids we would often simply shoot at the muzzle flashes we saw if we took contact and, as anyone who’s been there and done that knows, the AK can put out an impressive fireball with either no muzzle device or simply the slant break. But the AR does as well, especially if you’re running some type of muzzle break that’s competition oriented rather than combat oriented. In my carbine course we observe the different muzzle flashes that everyone puts out of their weapons at dusk to take note of just how much flash they’re putting out. The A2 does a good job of breaking it up, as does the Smith Vortex, which I had on my M24 and we ran on the M240s as well. 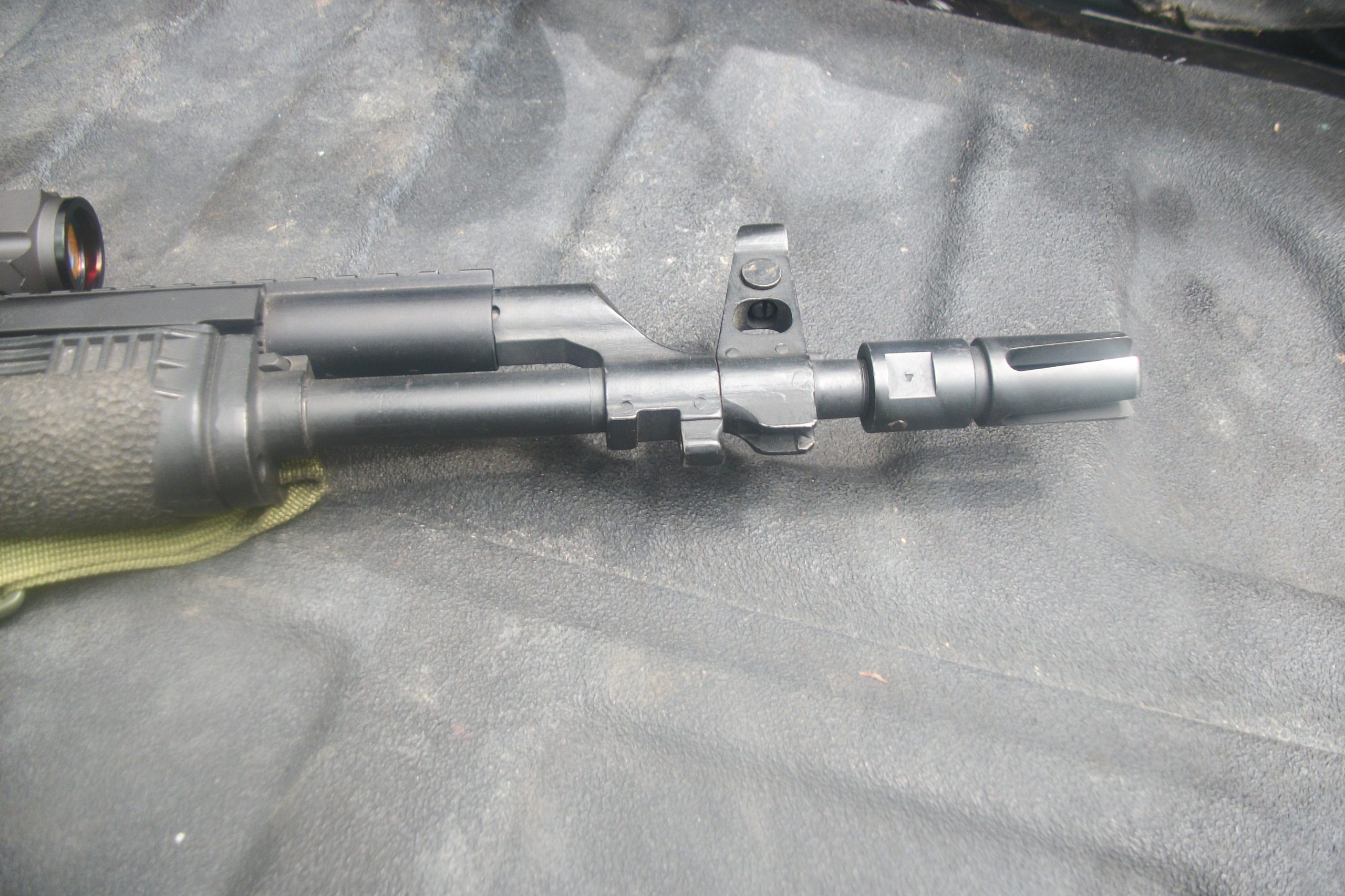 The late, great Peter Kokalis noted from his advising of the Atlacatl Battalion during the El Salvadoran civil war that that the Vortex became mandatory due to its effectiveness on night ambushes in the Central American jungle. I share his opinion, having ran it on an AK in the southeastern woodlands for many years now. 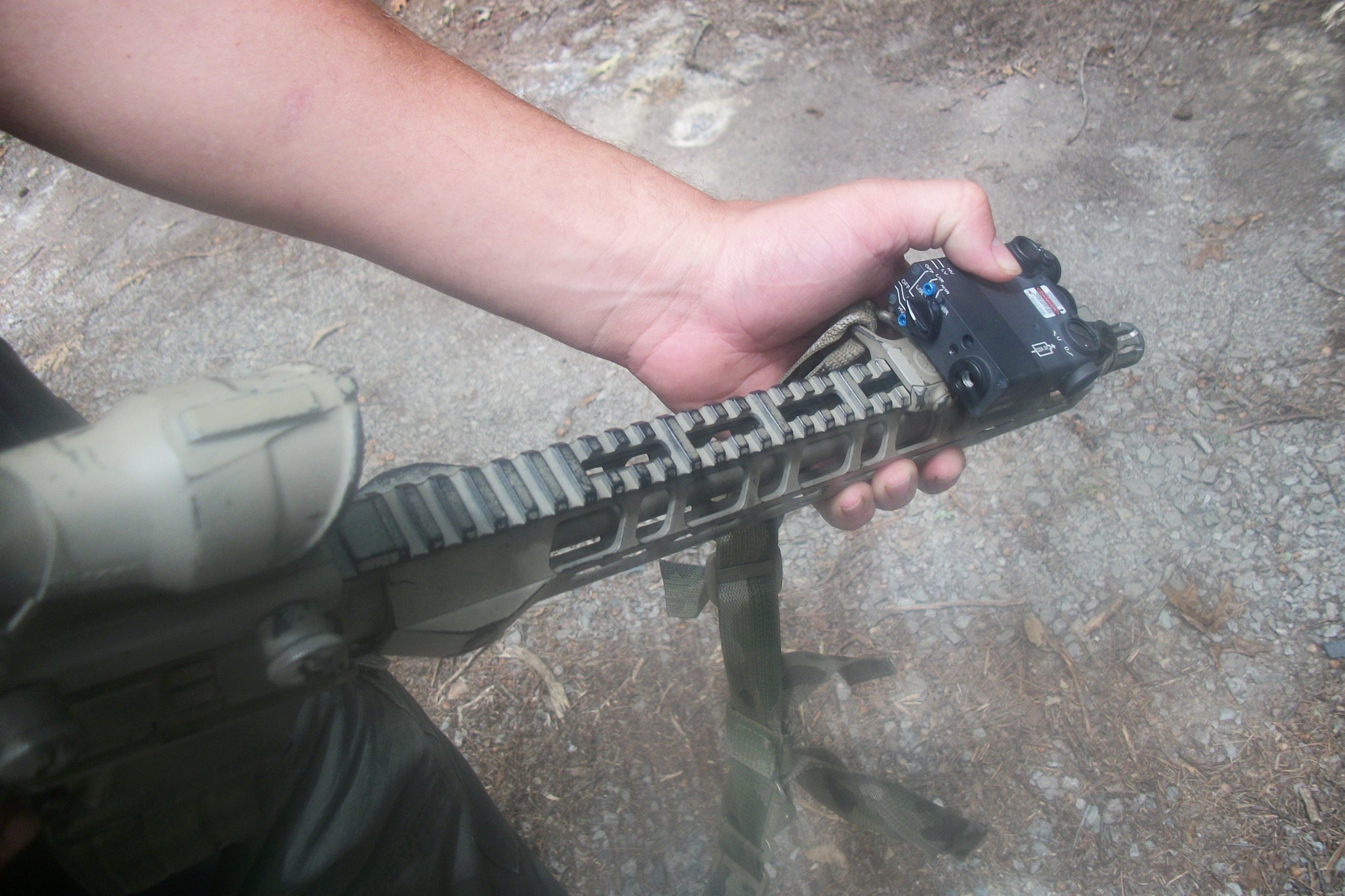 My go-to AR wears a rifle-length MLOK floated handguard from Palmetto State Armory. This type of handguard serves a number of functions. It keeps the barrel from shifting zero when I rest the handguard on objects in my environment as well as preventing a point of impact shift from shooting using the sling as a support. It also squeezes every bit of accuracy capability out of my barrel, which is always critical. I use a Magpul RSA for a sling mounting point and it gives me a physical reference point to place my hand when shooting- consistency is the key to accuracy. The sling is my same old tried and true VTAC sling I carried in Iraq and Afghanistan. Nothing fancy, it just works. In front of that sling mount is my Steiner DBAL I2 IR laser to interface with my PVS-14 when I’m wearing that on my head at night. The lower is nothing special, and the rest of the weapon is pretty much bone stock, even having a – gasp – mil-spec trigger. You don’t need a fancy trigger, you just need trigger time to break it in.

Now let’s talk about optics. Its 2020, you should have an optic on a weapon you plan on fighting with. I run an ACOG. There’s not a more bombproof optic out there. And for the people who’ve been in class they know exactly how bombproof mine is. Its a standard 4×32, not the fastest optic if I’m concerned with CQB type stuff, but for rural patrolling and, most importantly, positive identification (PID), the ACOG shines. Its lightweight and effective. There’s other prismatic optics out there that are really good also, including the optics from Primary Arms. But if you want a one n’ done, the ACOG is the one. 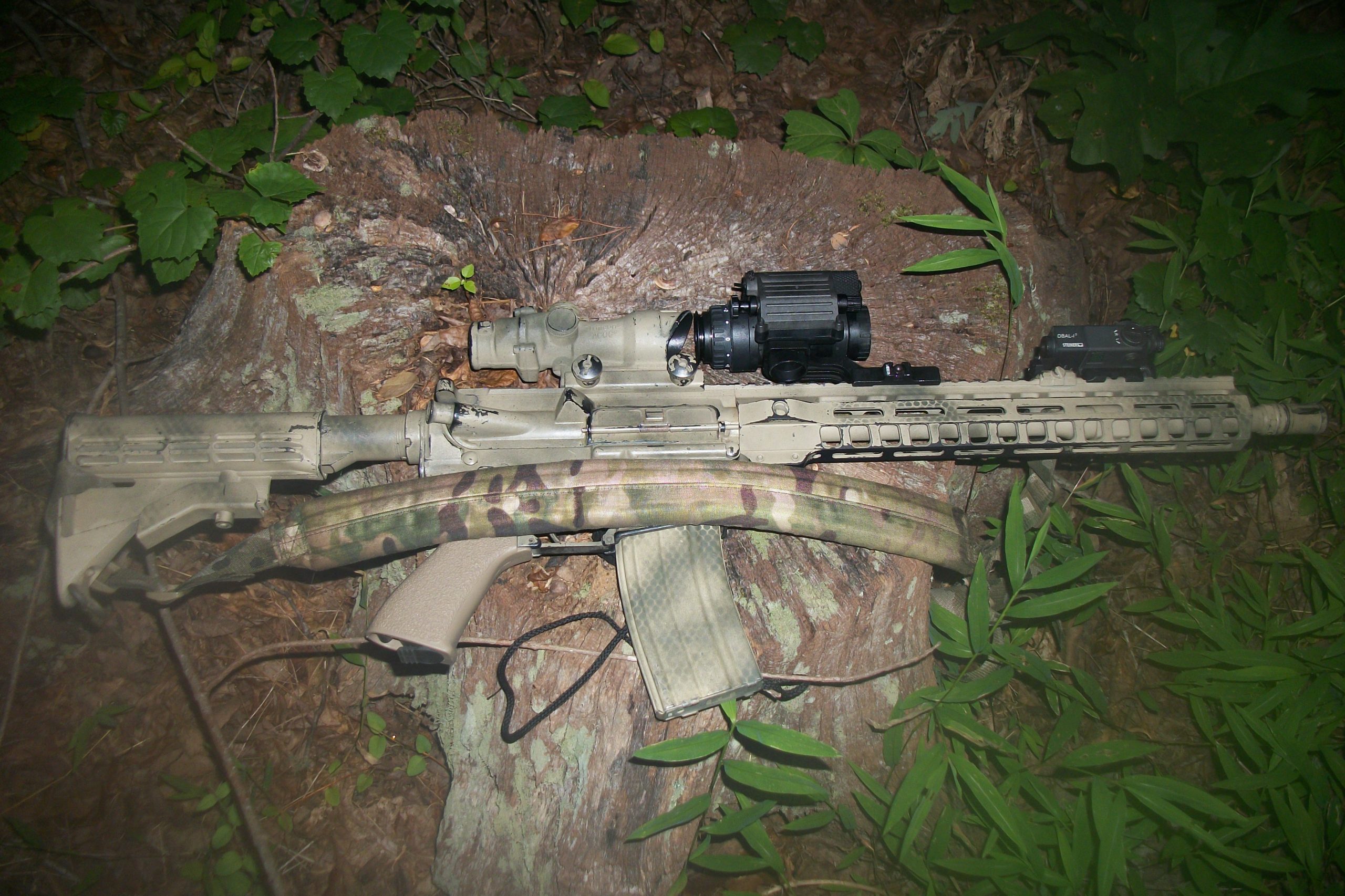 The other reason I run the ACOG is for another type of interface with my PVS-14. When I’m wearing them on my head, the laser in necessary for aiming. If I’m in a hide site or final firing position after I’ve stalked to make a kill, my PVS-14 is mounted in front of the ACOG. Lasers point both ways at night, but with a picatinny mount I’m ambushing with little signature. 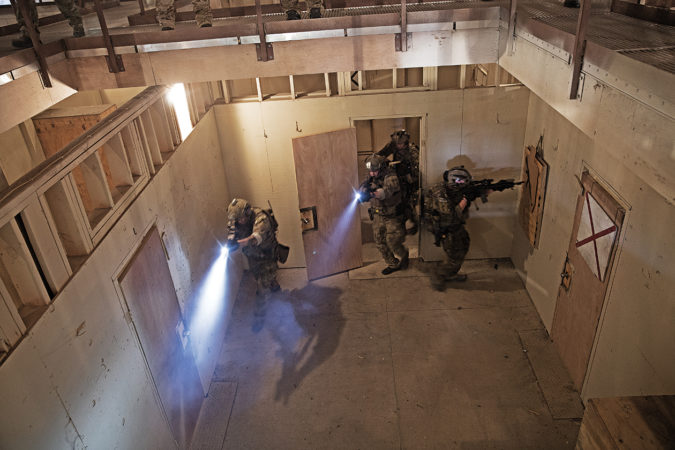 Room clearing is a tactic only for security forces and what they don’t tell you is that the casualty rate is very, very high. For a skilled guerrilla, this is easy killings. Running lights like this in a building with exterior windows is asking for a nasty surprise. Been there, done that.

So why don’t I have a weapon light??? Because I don’t need one on this weapon, that’s why. If I happen to need a tac light for some reason, I can mount one. Let’s go back to our mission. If its rural patrolling, why the hell do I want a light on my weapon that might accidentally activate and compromise my patrol? Nothing says ‘hey come shoot me!’ like a weapon light on a guerrilla’s weapon. Even in an urban fight, if the next building over has guys clearing it with lights, I don’t even need NODs to accurately engage them. Just aim at the lights where I see them through the windows (fatal funnels), force more of their people in, then bring the building down on top of them. Its a different mindset, definitely not one for the “I’m armed, but nonviolent” crowd.

Last, your weapon is not for show. It is a tool. One that requires constant training for proficiency. It is only drawn when it is to be used. Anything else is an empty threat.

5 thoughts on “My Go-To Carbine Setup”

Christ Jesus and Radio Comms for a Fallen World

Where we dial in daily life!

Life as an Ambulatory Equine Veterinarian

WHENEVER ANY FORM OF GOVERNMENT BECOMES DESTRUCTIVE OF THESE ENDS (LIFE,LIBERTY,AND THE PURSUIT OF HAPPINESS) IT IS THE RIGHT OF THE PEOPLE TO ALTER OR ABOLISH IT, AND TO INSTITUTE A NEW GOVERNMENT...

A vanguard movement of Western Civilization

Keeping amateur radio on when the grid is gone

Notes, tips, and reflections on communications generally, and radio specifically

Identifying the Best Training, Tools, and Tactics for the Armed Civilian!

Notes From The Bunker

Be a Survivalist who is a “Jack of all Trades”, master of some (preferably the life saving and life protecting arts).

You can't conquer a free man, all you can do is kill him. But that goes both ways. Thus, death to tyrants.

Providing news and information that's pertinent to you, and that the main stream news won't!

A Blog Dedicated to Survival and Preparedness Communications

Information to Hone Your Edge Against Bad Things

FOR GOD AND COUNTRY

This is a compilation of articles on the Internet, that may be useful in the upcoming festivities.

everyday and outdoor gear close to tactical and emergency

Always assume you are being watched

Ramblings of a middle aged outdoorsman

The Fight Begins - Are You Ready?

Read. Learn. Train. Do More PT. Be a pilot-operate your own controls.