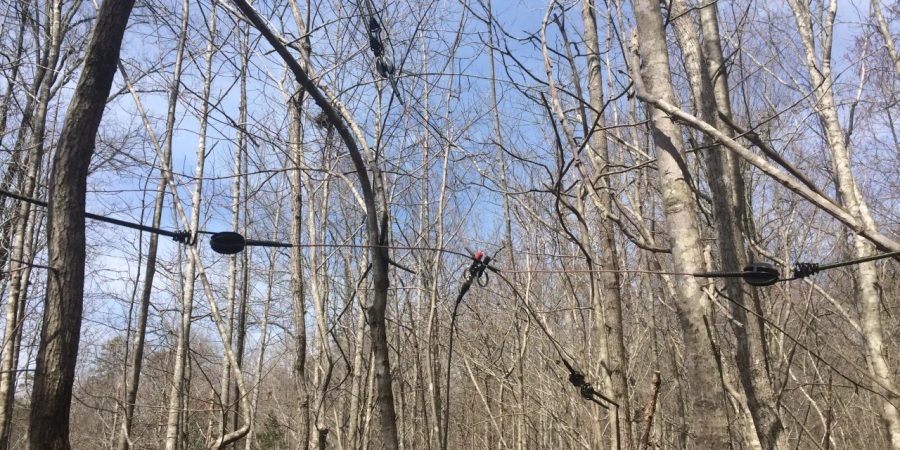 Going back to the early days of the Brushbeater blog, the Jungle Antenna post has been and continues to be one of the more popular posts I’ve done. And for good reason- I wrote it to be used. It’s the antenna every student in the RTO course builds and one of the designs they get hands on with, and it’s the one that they know works from the demonstrations we do with them. But often, as with everything, a context for the task and purpose has to be clarified.

Many preppers who contact me fall into a similar trap. I have an goal and recognize a need. What can I buy that does for me what I want it to do? How do I do this in the most cost-effective way? And finally (but what should be first), how do I obtain the skill to best use the gear I’ve purchased? Its a problematic point of view for a lot of reasons but one I get frequent questions about nonetheless. And that’s ok. I’ll normally answer it the same way- Use your stuff, Learn to use it even better, and never stop!

Students in the RTO Course preparing an improvised Jungle Antenna for use.

One of my objectives back then, as it remains in my classes and writing today, was emphasizing the skill of building your own equipment. With communications that’s improvised antennas, because it’s one of the better skills to have. Taking common and cheap components and using them to boost your capabilities is a great talent to have and makes you a force multiplier for your team or group. Those skills have served me very well and for the great people I’ve had in class, it’s went on to help them too. The end goal is getting the most bang-for-buck out of a piece of equipment as possible and with radios, that always means focusing on antennas.

The Jungle Antenna, 292 Antenna, Groundplane, OE-254 or whatever else you wanna call it, are vertical antennas designed to boost range from the relatively inefficient antenna on your radio while using the same power. It does this through efficiency; an antenna has to match, both the ‘hot’ element and the ‘cold’ element (positive and negative, respectively), in order to be resonant. Resonance is another term for an antenna’s electrical match to a particular frequency. And that resonance is measured through wavelengths– with each leg of the Jungle Antenna being one quarter wavelength long. It’s an incredibly simple antenna but it’s one that improves your transmitting and receiving ability- something you definitely want.

Jungle Jim operators in Vietnam getting a commo check before a patrol. Likely packed away in that ruck is a rolled up Jungle Antenna, ready to get strung up.

The Jungle Antenna gets its name from an interesting time in American military history. During the interwar period of the 1920s-30, the Army Signal Corps was experimenting with antenna designs to boost the range of their SCR (Signal Corps Radio, pre-A/N PRC designation in case you’re wondering) in jungle environments. Testing the designs in Panama, they found that if you take a vertical dipole and add two more negative elements, it boosts the radio’s signal in all directions even when the thick vegetation would otherwise absorb the signal. It found its way into use with groups fighting in the island campaigns and in Burma. Even though the crude radios would eventually fail from the humidity and harsh conditions, the antennas worked. Imperial Japan was also experimenting, with two engineers named Yagi and Uda coming up with a directional antenna that still bears their name. Both became very popular designs, with the Jungle Antenna saw extensive use in Vietnam and is still being taught to unconventional warfare RTOs today- because it’s simple, rugged and it works. This history provides us with a bit of context for the antenna and its intended use. It’s an omnidirectional antenna, creating a stronger signal in all directions, optimized for heavy woodland and jungle environments where much of your signal might be lost.

Why you want an Omnidirectional Antenna?

The Jungle Antenna up and running. We’re standing right under it and it disappears- think about how it’ll vanish in just a few more steps.

The Jungle Antenna does two things really, really well. It takes even a small amount of power and squeezes more range out of it, by getting your actual antenna higher, meaning more line of sight, while doing it much more efficiently. It also allows your radio to listen to other traffic much better. Because of it transmits and receives in all directions, this is a great antenna to have up for networking now– and when put up in the trees, the thin wire and natural materials make it virtually disappear. So even if all you’ve got is that $25 Baofeng, you can still get an impressive range out of that 4 watts that the UV-5R puts out. Not too shabby for something you can build out of a split post BNC adapter (the real name for what us Army guys call a Cobra Head), lamp cord and electric fence insulators.

Another, more tactical reason to have an omnidirectional antenna is in a retreat setting where a tactical operations center may have to communicate with multiple patrols simultaneously, and an omnidirectional antenna would increase the range of the radio at the base. I strongly suggest radio operators on a team carry one for their Contingency frequency also. People get lost, routes become compromised, plans change. When those plans change, it’s likely that a team in trouble needs their radio for personnel recovery, with the better range and reception from their Jungle Antenna helping them get found (along with a sound recovery plan).

But the most important reason that transcends all the others is the fact that you’re using something you learned to build yourself. You built it, you learned it works, and now you have that confidence in yourself and your equipment you wouldn’t have any other way. That confidence is earned through training.

2 thoughts on “The Jungle Antenna Revisited: Task and Purpose for the Partisan and Prepper”

Christ Jesus and Radio Comms for a Fallen World

Where we dial in daily life!

Life as an Ambulatory Equine Veterinarian

WHENEVER ANY FORM OF GOVERNMENT BECOMES DESTRUCTIVE OF THESE ENDS (LIFE,LIBERTY,AND THE PURSUIT OF HAPPINESS) IT IS THE RIGHT OF THE PEOPLE TO ALTER OR ABOLISH IT, AND TO INSTITUTE A NEW GOVERNMENT...

A vanguard movement of Western Civilization

Keeping amateur radio on when the grid is gone

Notes, tips, and reflections on communications generally, and radio specifically

Identifying the Best Training, Tools, and Tactics for the Armed Civilian!

Notes From The Bunker

Be a Survivalist who is a “Jack of all Trades”, master of some (preferably the life saving and life protecting arts).

You can't conquer a free man, all you can do is kill him. But that goes both ways. Thus, death to tyrants.

Providing news and information that's pertinent to you, and that the main stream news won't!

A Blog Dedicated to Survival and Preparedness Communications

Information to Hone Your Edge Against Bad Things

FOR GOD AND COUNTRY

This is a compilation of articles on the Internet, that may be useful in the upcoming festivities.

everyday and outdoor gear close to tactical and emergency

Always assume you are being watched

Ramblings of a middle aged outdoorsman

The Fight Begins - Are You Ready?

Read. Learn. Train. Do More PT. Be a pilot-operate your own controls.